I said I didn’t want to implement any linear algebra in Rust. Best to leave it to the experts! It seems I couldn’t resist the attraction.

Someone mentioned BLIS, and I fell into the rabbit hole. It’s an interesting linear algebra package, some of its specifics also fit ndarray better than regular BLAS does, so I had to keep reading.1

I found their papers (1) (2) and presentations (3). Really interesting! They present an efficient approach to implementing matrix multiplication and a whole “BLAS-like” suite of algorithms, by breaking it down into component algorithms. 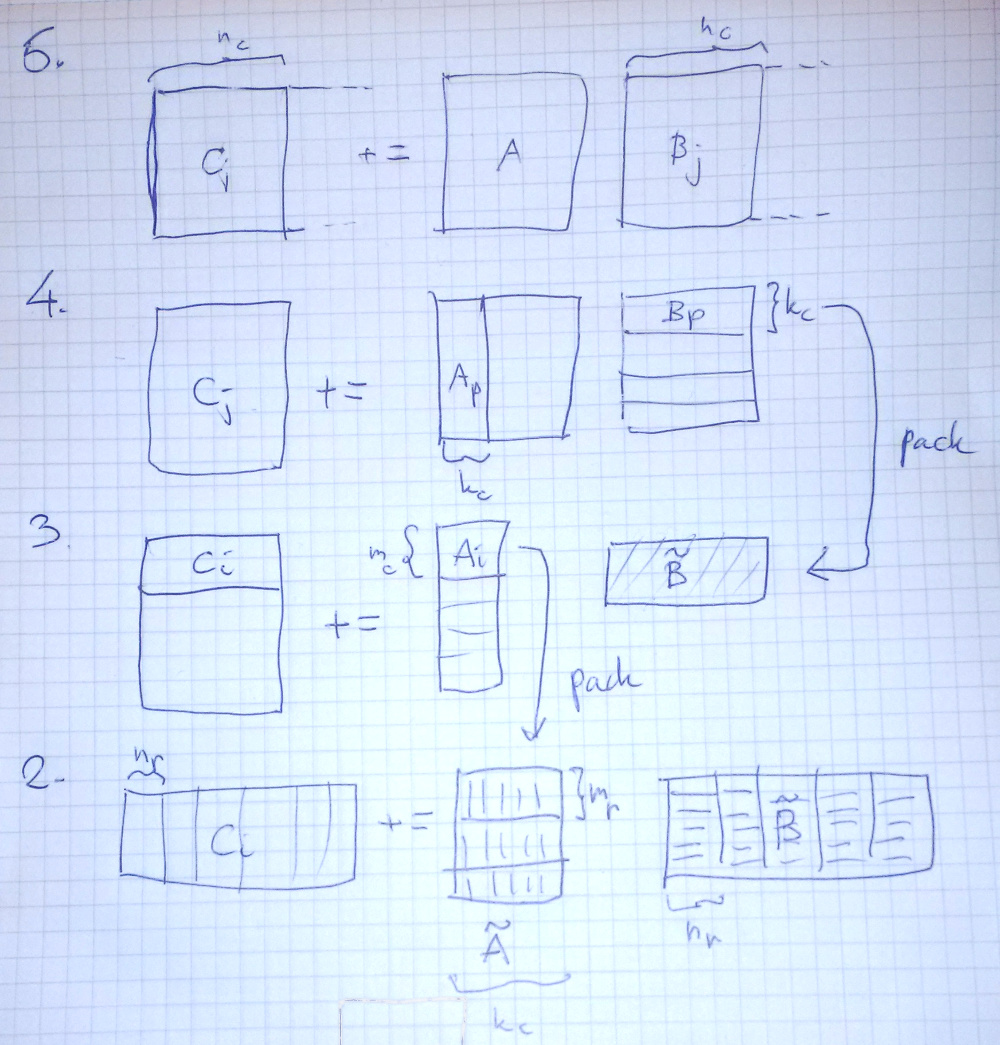 Artist’sMadman’s impression of the matrix packing process. The numbers 5, 4, 3, 2, 1 are nested loops (5 the outermost) where the microkernel is looped over as #1. You could look at the real image, too.

In particular they have this image (from wiki) which shows well how they partition the matrices. With their scheme, it does not seem so hard after all to implement a good matrix multiplication.

At the core of it there’s just one matrix multiplication kernel, a microkernel, that takes as input two 4-by-k input columns of data and multiply-add it into a 4-by-4 result matrix.2

Like the BLIS people found out, this means that the core of the operation is quite small. The expert-optimized cores needed are reduced compared to earlier strategies. (They go on to reuse the microkernel for several related operations, such as the symmetric cases).

I had to try to write this in Rust. It’s not going to be revolutionary, but it’s going to be fun, and a heck of an improvement over a naive matrix multiplication algorithm. This algorithm packs the matrices into a form that’s efficient to process, then feeds it to the microkernel. Packing the data pays off already when the matrices are very small.

Never mind that the comment only partly explains the interface. Look how simple and stupid this is!

I’m making a mockery of rust by using some simple macros for sixteenfold repetition and for unrolling the loop. (And yes, macros can ”capture” local variables like c![] does.) Apart from that, these are just some simple f32 operations.

With the kernel in place, “only” add the five nested loops around it, and it’s complete.

Now we turn to RUSTFLAGS="-C target-cpu=native" cargo build --release and we hope that the compiler can turn this into something decent!

This is what one iteration of the f32 kernel compiles to on my platform (AVX):

To evaluate it, I plug it in to ndarray’s benchmarks. Ndarray can already use OpenBLAS, and it’s easy to plug in this new code too.

Let’s see how they compare, the new code first:

And compare with OpenBLAS:

Uh oh OpenBLAS is good! And this is even when both are running with just one thread (OpenBLAS will otherwise automatically use multiple threads for this problem). We can compare the vitals (using perf stat) of the two runs, first our new code, then OpenBLAS. Note that these are not timing runs.

The autovectorized result of our microkernel isn’t too shabby. There’s some good news here. Our code is maxing out the one core pretty well. Relatively few cycles idle, so we’re doing something right. It should be no surprise that OpenBLAS uses fewer instructions, they probably emit them with a bit more care (hand coded assembly.)

Our code can be a good fallback for the cases that OpenBLAS doesn’t handle, in particular the general stride cases.

Now we can use this! The crate is matrixmultiply (docs) and implements f32 and f64 matrix multiplication in Rust. Input and output matrices may have general strides (this means that it has great flexibility in memory layouts of the operands)!

I guess the result kind of sucked, since it didn’t beat OpenBLAS? I don’t think so, they are the experts, their work is based on code that goes decades back, so we can’t be surprised. I even told you so, stick with the experts.

If we don’t do that, there’s plenty of avenues to develop matrixmultiply. 1) Find a plain rust formulation that autovectorizes better, 2) Try unstable simd support 3) Try inline asm! Following the methodology to only optimize the microkernel, it shouldn’t be too hard to improve this immensly with one of those techniques. 90% or more of the work is spent inside the microkernel.

Another interesting idea would be to use the blocked algorithm to implement a dense-sparse matrix multiplication.

My lie wasn’t so bad. It’s not like I’m setting out to implement all of linear algebra. No promises if it’s going to continue! In the meanwhile, this implementation is perfectly reusable, general, and has a structure that makes it easy to improve by parallelization or optimization.

We have so much work to do! I would like to get in touch with others that are interested. We need a place to gather, do you know about the irc channel #rust-machine-learning on irc.mozilla.org?

One “simple” thing on my mind that requires people to gather to collaborate is to further the state of numerical traits in Rust. Even code generic over just f32, f64 is rather unpleasant!